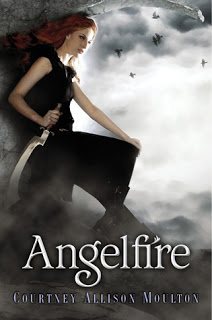 Angelfire
Courtney Allison Moulton
Publisher: HarperCollins
To be released: February 15, 2011
Summary (from Goodreads):
This debut, the first novel in a trilogy, is achingly romantic, terrifying, and filled with blistering action.
When seventeen-year-old Ellie starts seeing reapers – monstrous creatures who devour humans and send their souls to Hell – she finds herself on the front lines of a supernatural war between archangels and the Fallen and faced with the possible destruction of her soul.
A mysterious boy named Will reveals she is the reincarnation of an ancient warrior, the only one capable of wielding swords of angelfire to fight the reapers, and he is an immortal sworn to protect her in battle. Now that Ellie’s powers have been awakened, a powerful reaper called Bastian has come forward to challenge her. He has employed a fierce assassin to eliminate her – an assassin who has already killed her once.
While balancing her dwindling social life and reaper-hunting duties, she and Will discover Bastian is searching for a dormant creature believed to be a true soul reaper. Bastian plans to use this weapon to ignite the End of Days and to destroy Ellie’s soul, ending her rebirth cycle forever. Now, she must face an army of Bastian’s most frightening reapers, prevent the soul reaper from consuming her soul, and uncover the secrets of her past lives – including truths that may be too frightening to remember.
This past week, I feel like I’ve only heard talk about this book. I’m super excited for this release, even though February of 2011 is so far away. I will definitely be waiting for this book for a while, but it will be worth it.
Waiting on Wednesday is a weekly event highlighting exciting upcoming releases. It is hosted by Jill at Breaking the Spine.

Ya girl actually has an ARC to review! ⁠⁠
QOTD: What are some of your favorite series?⁠⁠
I'm so glad I got to read this series as part of the #ButDoTheyBang readalong, even if the series was not for me. I've read all of Tessa Dare's novels except her first two series so this readalong has been a great excuse to read them!⁠⁠
🚨Red Bookstack Challenge🚨
What are some of your favorite dad’s in books? I went with an unconventional one with the Kate Daniels series.
Yellow is just so cheerful, it makes me want to smile.