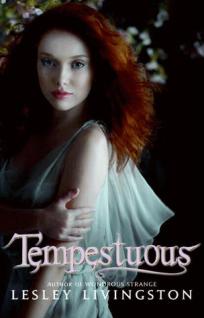 Tempestuous
Lesley Livingston
Publisher: HarperTeen
To be released: December 22, 2010
Summary (from HarperTeen Site):
“I don’t love Sonny Flannery.”
That’s the lie Kelley Winslow told to protect the boy she loves from a power he doesn’t know he possesses. Devastated, Sonny retreats—to a haven for Lost Fae that’s hidden deep underneath New York City.
But Kelley’s not about to let things end in heartbreak. To get Sonny back, she’s got to find out who’s after his magick—and how to use her own. She’s got to uncover who’s recruiting Janus Guards to murderously hunt innocent Faerie. She’s got to help rebuild the shattered theater company she called family. And she’s got to do it all without getting dangerously distracted by the Fennrys Wolf, whose legendary heart of stone seems to melt whenever he’s around Kelley.
The intrigue and romance that began with Wondrous strange and Darklight come to a stormy head in Tempestuous, the breathtaking conclusion to Lesley Livingston’s ravishing urban Faerie trilogy.
I love this series and I’m sad for it to come to an end but I cannot wait to see how Lesley Livingston plans to conclude this wonderful series.
Waiting on Wednesday is a weekly event highlighting exciting upcoming releases. It is hosted by Jill at Breaking the Spine.

One thought on “Waiting on Wednesday (25) – Tempestuous”