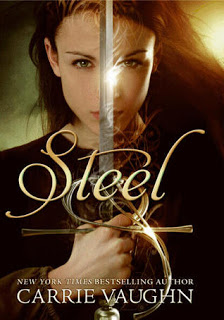 Steel
Carrie Vaughn
Publisher: HarperTeen
To be released: March 15, 2011
Summary (from Goodreads):
When Jill finds a rusty sword tip on a Caribbean beach, she is instantly intrigued—and little expects it will transport her through time to the deck of a pirate ship. Will a dark enchantment, salty kisses, and a duel with an evil pirate captain leave her stranded in the eighteenth century forever?
Drawing on piratical lore and historical fact, Carrie Vaughn creates a vivid world of swaying masts and swelling seas, where blood magic overrules the laws of nature, romance is in the air, and death can come at the single slip of a sword.
This book sounds awesome. I mean time traveling and pirates, how can this not be awesome? Cannot wait to read it later this year.
Waiting on Wednesday is a weekly event highlighting exciting upcoming releases. It is hosted by Jill at Breaking the Spine.

"The sorceress might be an evil bitch, but she's my evil bitch." - Rydstrom Woede
Raise your hand if you're excited for #Bridgerton season 2 🙋‍♀️🙋‍♀️🙋‍♀️
😈 BOOK REVIEW 😈
#StepbackSaturdayReveal!
Happy #StepbackSaturday!! This stepback is from a romance author I've read, but I haven't read this specific book.
Happy #CoverLustFriday! I honestly forgot how pretty this book cover is!