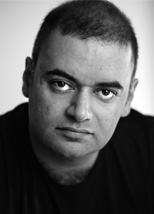 
What inspired you to write a series about a modern, female Templar knight?

Firstly, I love action heroes. Secondly, I have daughters, so I thought it would be far more fun to write something inspired by them.
A lot of hero myths centre around a son following in his father’s footsteps. Star Wars of course,  but also in the Arthurian legends and even in comic books, the Batman / Robin dynamic replays this theme constantly.
But hey, what about daughters?
It was far more interesting with Billi being a girl following her father, who is a very macho warrior. Arthur [her father] symbolises the grim, brutal and single-minded male view; it clashes beautifully with Billi’s. The father-daughter dynamic is a found relationship for all girls, and of course is highly personal to me.

In Dark Goddess, Bill and the Templars head to Russia. What type of research did you have to do for this book?

I’ve read about Russian mythology for many, many years. The first draft of Dark Goddess was written in 1994, so this has been a long time in coming. I studied the Russian Revolution at school and politically, Russia casts a long shadow over Europe, so I’ve always had some awareness of it.
But when I knew I was writing Dark Goddess, I went out there and spent a week in Moscow. Nothing beats walking the streets to get that down low feel. I love exploring cities and Moscow is something else. The biggest city in Europe, a very different culture to Western Europe, and the architecture is of a monolithic scale. Since Devil’s Kiss was written in my home city of London, Dark Goddess had to have the same level of detail. I couldn’t just rip my information out of Wikipedia!
The same applies to my new project, which is set in India. I had to go out there to absorb the atmosphere and pick up the minute details that you can’t get any other way. Talking with the locals gives the story far greater depth. I hope to be able to tell you more about that soon.

What scene was the most difficult for you to write?

The romance, as ever! It’s getting easier but it’s the area I have to work the hardest in. Action, battle scenes and moment of high tension are easy in comparison. Part of the problem is it’s not a genre I’m familiar with. I don’t know how far to go without it sounding cheesy or overly melodramatic. I’m learning it’s more in the small gestures than the grand.
I’m really proud of the scene with Ivan and Billi in the forest. They’re both exhausted, scared and at the end of their endurance. But they share a common past, both isolated and lonely. Billi’s been brought up to be hard and tough, but with Ivan she let down her guard and allows herself to be tender, which is a brand new territory for her.

What was the most difficult part of writing a sequel?

What to cut out. I’d done years, years of background research and there was so much I wanted to put in. I’d read the Master and Margherita by Bolgakov and want to put in a homage to that, I wanted to add Rasputin, more on the supernatural creatures out of Russian myth. The book could have easily doubled in size.
But the story is paramount. My job is to tell the tale as best and as economically as possible. It’s my style, I suppose. There’s a risk that an author’s vanity gets in the way of telling the tale. That must be avoided at all costs! Readers and editors will see it immediately and it will kill the story stone dead.

If you could live anywhere during any time period, where and when would it be and why?

I’m pretty keen on the 1960’s. The music, the fashion and the excitement of politics, the Kennedys, King, Malcom X and the Civil Rights movement were something I studied years ago. I’m a huge Sean Connery fan so it would have been cool to have been part of that period when Bond was all fresh and new. How awesome it would have to see the Beatles and the Stones at their peak? Plus the moon landing. Even now I get an electric thrill watching it.
I love the Mad Men series, so it would have been great to be suited and booted in that era.

What book do you wish had been published when you were growing up?

My first answer would have been His Dark Materials but I wonder if I would have enjoyed it as much as a child, maybe not. In which the Mortal Engines series by Philip Reeves. Steam-punk terminators, kick-ass heroines and the motion cities. It’s the best, most original fantasy world I’ve come across since Tolkien and the characters are incredibly vivid. Reeve’s combines the grand scale with the personal perfectly. My favourite kind of tale.

What is your favorite part about being an author?

The writing and the sense of freedom launching into it. There are no limits. I love history and fantasy, so I feel I can go anywhere I want. I’m no limited to writing domestic kitchen sink dramas or by budgets. I write want I want, I write what I love. No matter how bad the day’s been, once I enter the story I am lost. It’s so clear in my head, so real, it’s a whole world I have to explore. An infinite number of dimensions open up before me. It’s an immense privilege being able to earn my living this way. I know how lucky I am.

Thanks so much Sarwat!! Come back later this week to enter to win finished copies of Dark Goddess in stores tomorrow!