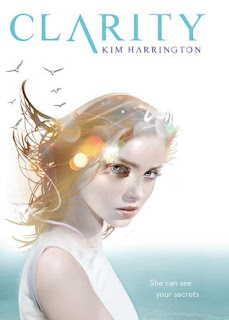 Clarity
Kim Harrington
Publisher: Scholastic Point
Release Date: March 1, 2011
Pages: 256
Source: Received from Publisher
Ratings: 5 Stars
Summary (from Goodreads):
When you can see things others can’t, where do you look for the truth?
This paranormal murder mystery will have teens reading on the edge of their seats.
Clarity “Clare” Fern sees things. Things no one else can see. Things like stolen kisses and long-buried secrets. All she has to do is touch a certain object, and the visions come to her. It’s a gift.
And a curse.
When a teenage girl is found murdered, Clare’s ex-boyfriend wants her to help solve the case–but Clare is still furious at the cheating jerk. Then Clare’s brother–who has supernatural gifts of his own–becomes the prime suspect, and Clare can no longer look away. Teaming up with Gabriel, the smoldering son of the new detective, Clare must venture into the depths of fear, revenge, and lust in order to track the killer. But will her sight fail her just when she needs it most?
Clarity is a great debut novel that will have you drawn in right from the beginning. Filled with mystery, a great strong snarky female lead and plenty of boys, Clarity is filled with fun.
The best thing about Clarity is the characters. All the characters are AWESOME!! Clare is definitely one of my favorite characters EVER. She is so full of spunk. Clare is such a strong character and she has to be being from a family of “freaks” and bullied about it at school. Clare can really hold her own against everyone else. And she is full of snark. I LOVE SNARK! I would have been fine just reading a story about Clare’s everyday life even if nothing happened because she is just entertaining. Clare had me laughing out loud at times too. She’s pretty kick-ass. I really loved Clare’s brother Perry too. While Perry has his flaws and is a player, he still has this loveable characteristic. Clare and Perry’s relationship was spot on too. They truly felt like brother and sister, you could feel the love between them and the need to protect each other, and I loved that.
While Clare and her family has special abilities, the supernatural aspect from their abilities did not dominate the story. I really liked that abilities was not the center of the story. Instead, the characters and the relationship between the characters was what I felt was center of the story. Also the mystery WAS GREAT! I literally did not know who the murderer was. I would suspect it to be one person but find out it wasn’t. I thought the murderer was like four different people and in the end I WAS WRONG! I had no clue who the murderer was. That’s great a feat to completely blind side the read with who the killer is. I really liked that.
I really loved how Kim wrapped up this book. The ending wrapped up everything nice, but still left things open enough for the next book. Especially with Clare’s boy situation. I really cannot decide if I want Clare with Justin or Gabriel. They both have their own flaws and own charms so I cannot pick!
Overall, Clarity was a great fun read. I loved Clare, she was such a strong, confidant, spunky character. She is definitely one of my favorite characters of this year. I cannot wait to read the next book because it is sure to be AWESOME!!

Don’t forget to enter to win a signed copy of Clarity and check out Kim’s launch party recap HERE!