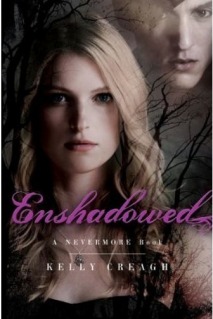 Kelly Creagh
Publisher: Atheneum
To be released: January 24, 2012
Summary (from Goodreads):
While Varen remains a prisoner in the dream-world, Isobel is haunted by his memory. He appears to her in her dreams and soon, even in her waking life. But is she just imagining it? Isobel knows she must find a way back to Varen. She makes plans to go to Baltimore. There, she confronts the figure known throughout the world as the Poe Toaster—the same dark man who once appeared to Isobel in her dreams, calling himself “Reynolds.”
Isobel succeeds in interrupting the Toaster’s ritual and, in doing so, discovers a way to return to the dream-world. Soon, she finds herself swept up in a realm which not only holds remnants of Poe’s presence, but has also now taken on the characteristics of Varen’s innermost self. It is a dark world comprised of fear, terror, and anger.
When Isobel once more encounters Varen, she finds him changed. With his mind poisoned by the dream world, he becomes a malevolent force, bent on destroying all—even himself. Now Isobel must face a new adversary, one who also happens to be her greatest love.
This is the second book in the Nevermore series. I was strangely fascinated and enjoyed the first book (read my review of Nevermore) and am really excited to see what happened next because of how the first book ended.
Waiting on Wednesday is a weekly event highlighting exciting upcoming releases. It is hosted by Jill at Breaking the Spine.