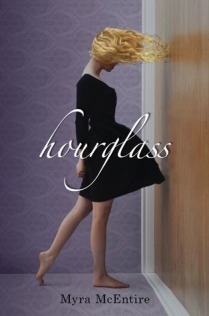 I do not even know where to start with Hourglass. I have been putting off writing this review for months because this book is just filled with win. I have been really stumped as to how to my feelings for this book into words. If I could, I would just write a review that would say “Buy this book it is full of awesome. Everyone must buy it. ADJKAJGKAJGKDL It’s awesome.”, but that would not be super helpful.
In April, I did a post for the ten reasons why you must buy this book. I think that I’m going to use that as a basis for my review so this review is not just BUY THIS BOOK. So let me start off by talking about the characters in this book. I felt that all the characters in this book served a purpose and were all well defined characters. Every character that we met had their own personality and traits. The characters were extremely well written. Let’s start with Emerson Cole, the main character. I loved her. She was snarky, kick-butt and different. She was strong and able to stand up for herself, even when everyone thought she was crazy because of her visions. Also, she can kick-butt. Seriously, she has brown belt to prove it. And I love girls who can kick-butt because I truly wish I was that badass. And she is snarky. I love snark. It makes me laugh and Em did make me laugh. Emerson was one of those characters that got stuck in my head after I finished reading the book. She was just one of those characters with a really strong voice that will stick with you. And then there are the boys in this book. I just have to mention them. So first we have Michael Weaver who is a very mysterious guy. He works for a mysterious agency and knows more about Em than Em herself does. Basically, I was smitten by him the first time we met him and ended up loving him more as the book went out and we learned more about Michael. And then ther was also Kaleb, the other boy in this book who I really loved. Kaleb is Michael’s friend and works with Michael and is just as hot as Michael. But they are too completely different boys. Kaleb was in my opinion adorable. At times I felt really bad for him and just wanted to give him a hug. He was probably one of my favorite characters in this book. He was flawed and dealing with issues but was still able to be strong. I like that. And the romance. Boy. The romance could have gone crazy wrong but it was perfect. The build-up and the sexual tension was all spot on perfect. I was at points literally screaming for them to just kiss already, which I love. I just loved the romance.
Okay, so now I want to talk about how amazing the plot of this book is. Seriously. I did not really know what to expect when I started this book. It sounded like it might be just another paranormal teen book with a girl who sees visions and stuff. But what I got from Hourglass was none of that. I can truly say that this book was something new. Hourglass was seriously a breath of fresh air. I really liked how it blended paranormal elements such as the visions with some more scifi elements such as time travel. It was all mystery, action, paranormal, and wibbly-wobbly timey-wimey stuff wound up into a big ball of awesome. I really really liked the balance between all those elemts. It truly finds a perfect balance between the two and creates this amazing story. And this story kept me on the edge of my seat. I did not know what was going to happen next. I was constantly being blown away by the plot. Twists and turns that took me by surprise. The last quarter of the book, I swear I was just sitting there reading with my mouth wide open because I was literally blown away. I did not expect the story to go in certain ways it did. And I just want to say that Myra McEntire has been added to my list of evil genius authors. There is this huge amazing twist in the book that will literally leave you in shock. I was blown away that she had actually did that. You will know the part I’m talking about when you read the book because you will be sitting there reading the book, dumbfounded that that event just actually happened. Boy, is that an amazing and horribly mean twist.
I really do not know what else to say. This book is just full of win. Myra McEntire has written a beautiful, stunningly awesome debut. It is hard to fathom that this book is her debut novel because it is just so stunning. The writing is beautiful and she has created this whole world were Em and her friends live and do some crazy things. Myra McEntire excuted the plot so brilliantly and is now an evil genius in my book. She literally kept me flipping pages as quickly as possible. Plus, she is also a Whovian. A reference to Doctor Who in your book has me in love with your book forever. Just saying. I am literally blown away by how amazing this book is. Everyone needs to pick up a copy of this book and read it as soon as possible. I mean who would not want a copy of this beautiful book on their shelf? The cover is just as beautiful as the words inside of it. Hourglass is probably one of my favorite books of 2011. Hourglass is an amazing debut that is a must read because it has a little bit of something for everyone.

It is officially 2 months until the Near Witch by Victoria Schwab is out for everyone to read. 2 MONTHS!! That is so soon!! To celebrate this very special day, I am doing another giveaway of a *signed* finished copy of Near Witch. All you have to do is fill out the form below and you are entered to win. This prize, however, will not arrive until closer to the publication date since it is being sent out from the publisher and will not be mailed out until closer to August when the finished copies are available. This contest will run from today Thursday June 2 and end at midnight on Tuesday June 7. If you tweet about the giveaway please use #NWgiveaway

Also these following blogs are also doing a giveaway of the Near Witch:


We are all doing this giveaway because of the little thing call the Near Witch Rap. Go ahead and watch it below while I go hide in a corner.

I have been thinking a lot lately about my review format. I have decided I want to change it a bit. I am going to get of the summary of the book, because I know when I read a review of the book I skip over the summary anyway and get straight to the review anyways. I also feel like I want to include a bit more information about the book itself. So I have changed my review format and will be in place from now on. I’m really excited about this for some reason. Yes, I am nerd.

The Iron Knight
Julie Kagawa
Publisher: Harlequin Teen
To be released: October 25, 2011
While there is no summary for this book yet, I don’t need one to want it. The cover was just released to day and I am in love. I think this is one of my favorites for the series. So pretty. Also, I just need this book. Because, seriously, Julie Kagawa was evil with the ending of the third book in the Iron Fey series Iron Queen. I want Ash’s story. Now!! I’m so excited for this book.
Waiting on Wednesday is a weekly event highlighting exciting upcoming releases. It is hosted by Jill at Breaking the Spine.
Follow Overflowing Shelf on WordPress.com
Join 652 other subscribers