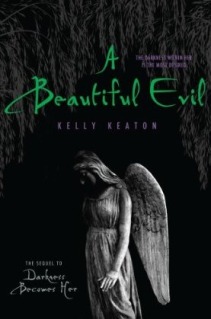 A Beautiful Evil
Kelly Keaton
Publisher: Simon Pulse
To be released: February 21,
2012
Summary (from Goodreads):
A power she can’t deny. A destiny she’s determined to
fight.  When
Ari first arrived in the dilapidated city of New 2, all she wanted was to
figure out who she was. But what she discovered was beyond her worst nightmare.
Ari can already sense the evil growing inside her—a power the goddess Athena
will stop at nothing to possess.

Desperate
to hold on to her humanity and protect her loved ones, Ari must fight back. But
Athena’s playing mind games, not just with Ari but with those she cares about
most. And Athena has a very special plan for the brooding and sexy Sebastian.

Ari
is determined to defeat Athena, but time is running out. With no other options,
Ari must unleash the very thing she’s afraid of: herself.

I really liked Darkness Becomes Her and cannot wait to
see where the next book in the series takes us. This is definitely a great
series that reimagines mythology!
Waiting on Wednesday is a
weekly event highlighting exciting upcoming releases. It is hosted by Jill at
Breaking the Spine.