Au Revoir, Crazy European Chick
Joe Schreiber
Publisher: Houghton Mifflin Books for Children
Release Date: October 25, 2011
Series or Standalone: Standalone
ISBN: 9780547577388
Format: ARC
Pages: 192
Source: Borrowed
Websites:
Joe Schreiber – Blog
Rating: 4 Stars
An action adventure movie meets young adult novel in Joe Schreiber’s young adult debut novel Au Revoir, Crazy European Chick. In a relatively short novel, Joe Schreiber manages to lead his characters on a wild adventure that takes course over one surreal night.
It is anything but an ordinary prom night for Perry Stormaire. Much more willing to play in his band then go to prom, Perry’s mom forces him to take their quiet and geeky Lithuanian exchange student Gobi to prom. The night is going to be a disaster, but not in the way Perry expected. Gobi turns out to be a trained assassin who leads Perry on a wild and dangerous adventure through out Manhattan whether he wants to go or not. The escapades grow as Gobi’s intentions become clear, leaving Perry with one wild story to tell at night’s end.
In a book that is little shy of two hundred pages, a lot happens. Perry’s world is literally flipped upside down in the course of one night. One minute Perry and Gobi are at prom, and then they are in a New York City club and a dead man is being flown through a window and landing on Perry’s car. The events in the book continue in a rapid-fire pace until the very last chapter. The quick pace wraps the reader up in the action of the book, feeling flung around and confused at times just like Perry is. The fight and action sequences of the book occur very quickly, but are detailed enough that the reader understands who is fighting who and what is occurring. The plot builds momentum until the climax where a large, epic, action-packed scene occurs that wraps up the major storylines in a hail of bullets.
Since the story is so plot driven and fast-paced, the characters almost become secondary figures to action of the book. Perry is meant to be a typical high school boy who enjoys playing in his band and worrying about getting into a good college. He develops little as a character, even though he is put in situations that threat his life and would have a stronger impact on most people’s lives. . He goes on a wild adventure, but in the end, he is still the same Perry as in the beginning, but has an awesome story to tell. Gobi, on the other hand, was a more complex character. Gobi seemed to be a shy, strange foreign exchange student but was really covering up a mountain of secrets that are revealed over the course of one night. While Gobi might be an assassin who is leaving a trail of bodies across Manhattan, the reasons for her actions are noble and the reader can sympathize with her.
Schreiber’s writing captures the voice of a teenage boy thrown into some crazy situations perfectly. Perry’s reactions to the far-fetched situations he was in were exactly the sort of reactions I would have had if I were being forced to participate in car chases, heists, and murder. Perry is just as bewildered and confused by Gobi’s actions as the reader is. Schreiber also is able to balance the intense action with humor. Some of Perry’s comments on the events he is taking place on made me giggle aloud. Schreiber had some very witty lines that highlighted the absurdity of the actions Perry countering the high-paced action with some well needed humor.
The book tries to incorporate romance between Gobi and Perry but the romance falls short. The action is the primary focus of this book and everything else gets pushed aside. Perry goes from not wanting to associate with Gobi to somehow falling for her while she is putting his life in danger. The characters and their relationship needed to be better developed to make the romance between them plausible, but the focus was mostly on the action instead.
Each chapter in Au Revoir, Crazy European Chick starts out with a college essay from different college. I was a bit unsure if these were real college essay questions or ones that Schreiber created for the purpose of the book, but the events that took place in each chapter could loosely be related in some form to the college essay topic. Each chapter could be read separately as a college essay and would still make sense, but could also be read together as one large story. The essay questions as chapter titles ended up tying all the action in the book together and become part of the plot itself. The book is Perry’s college essay, albeit a very long college essay, telling the story of one night that changed his life.
Au Revoir, Crazy European Chick is a quirky quick read that would appeal to both boys and girls. Au Revoir, Crazy European Chick is not too serious or extremely special, but it will take the reader on an action packed adventure. With the pacing of an action movie and the humor of high school comedy, Schreiber’s young adult debut is full of fun. 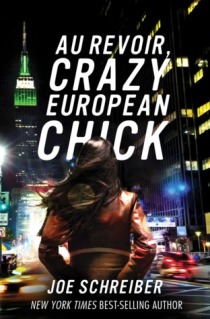 Au Revoir, Crazy European Chick
Joe Schreiber
Publisher: Houghton Mifflin Books for Children
To be released: October 24, 2011
Summary (from Goodreads):
Perry Stormaire is a normal high school senior– he is busy applying to college and rehearsing with his band –until he agrees to go to the prom with the Lithuanian exchange student who is staying with his family. It turns out that Gobi Zaksauskas is not the mousy teenager that she seems but rather an attractive, confident trained assassin. Instead of going to the prom, Perry finds himself on a wild ride through the streets of New York City as Gobi commandeers the Jaguar his father lent him for the prom in order to take out her targets. Perry learns a lot about himself – and ends up with some amazing material for his college application essays.
I first heard about this book from a friend at BEA. It sounds like a really good funny read. Cannot wait to read it.
Waiting on Wednesday is a weekly event highlighting exciting upcoming releases. It is hosted by Jill at Breaking the Spine.
Follow Overflowing Shelf on WordPress.com
Join 656 other followers

Every now and then, you have to touch your shelf...
🎸 #TropeTuesday 🎸
Y'all need to believe the hype around this delightfully sexy novella by @alexandravasti!
✨ Stepback Saturday Reveal ✨
Happy #StepbackSaturday! Can I tell you how hard it was to find a non-HarpersCollins title on my shelf with a stepback?? It was HARD.
Are you planning on doing some #BlackFriday shopping today?