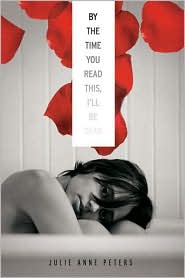 By the Time You Read This, I’ll Be Dead
Julie Anne Peters
Publisher: Hyperion Books CH
Release Date: January 5, 2010
Pages: 224
Ratings: 5 Stars
Summary (from Goodreads):
Daelyn Rice is broken beyond repair, and after a string of botched suicide attempts, she’s determined to get her death right. She starts visiting a website for “completers”- http://www.through-the-light.com.
While she’s on the site, Daelyn blogs about her life, uncovering a history of bullying that goes back to kindergarten. When she’s not on the Web, Daelyn’s at her private school, where she’s known as the freak who doesn’t talk.
Then, a boy named Santana begins to sit with her after school while she’s waiting to for her parents to pick her up. Even though she’s made it clear that she wants to be left alone, Santana won’t give up. And it’s too late for Daelyn to be letting people into her life. Isn’t it?
National Book Award finalist Julie Anne Peters shines a light on how bullying can push young people to the very edge.
What a stunning, powerful story. This book left me speechless. While reading this book I laughed, I cried and even did both at the same time. A story full of emotions, By the Time You Read This, I’ll Be Dead is a stunning book that will stay with you.
While the main character, Daelyn, might not be able to physically speak, she says so much. Julie Anne Peters takes you into the mind of Daelyn, showing you all the pain she has suffered in her life and why she believes death is the only way out. Daelyn has suffered horrible verbal and physical attacks from bullies her whole life and this novel truly demonstrates the extreme side effects of bullying. While this book is fiction, Daelyn’s story could be the story of any number of teens that have suffered from bullying.
How the story unfolded was one of my favorite things about this book. While the reader knows Daelyn has attempted suicide, we do not know the reasons behind the attempts and how she ended up injured in the beginning of the story. Through a website Daelyn finds, the read slowly gets glimpses into Daelyn’s past and the reasons for her wanting to end her life are slowly revealed. While the website is a suicide site, I felt that it was not there to aid people to end their lives. The website became a way for Daelyn to open up and expose her secrets and real the inner demons she was with which she struggled.
Even though this book deals with a multitude of extremely serious issues, Juile Anne Peters is able to offer some comic relief through the character Santana. I loved Santana. Even though Daelyn cannot speak, Santana is relentless in trying to draw her out and form some sort of connection with her. He provides much need relief from the serious and sad thoughts of Daelyn. He tries various ways to engage Daelyn, even enlisting the help of his pet rat. I cried when Santana revealed what was wrong with him. Santana is such an important character in this book, helping Daelyn even though she does not want help.

This book was just amazing. It captured so many emotions, demonstrates the extreme side effects of bullying, and deals with suicide efficiently. The ending of the book was one those ending that I hate, yet love, leaving it up to the reader. This book was beautifully written and truly captured the pain that comes from bullying and belongs up on shelves with books such as Speakby Laurie Halse Anderson and 13 Reasons Why by Jay Asher.