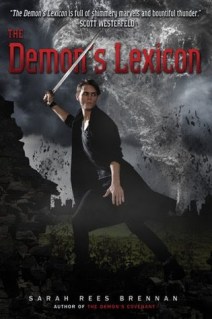 The Demon’s Lexicon
Sarah Rees Brennan
Publisher: Margaret K. McElderry
Release Date: June 2, 2009
Series or Standalone: The Demon’s Lexicon #1
ISBN: 1416963790
Format: Hardcover
Pages: 336
Source: Bought
Websites:
Sarah Rees Brennan – Website
Sarah Rees Brennan – Blog
Sarah Rees Brennan – Twitter
Rating: 4.5 Stars
I just want to start off by saying that this book is the first book in one of my favorite series. Seriously. You do not want to know how many times I have read this book (It’s a lot). I first read this book way back in June of 2009 when it was a featured book on PulseIT. I remember reading it in one sitting and staying up way to late for a school night. Every time I go back and read it, it becomes better and better.
Let me start off by talking about the characters. I love every single character in this book well except for the bad guys. I’m just gonna go through the characters in this book and just rattle off some of my favorite things about them. Nick Ryves: dark, brooding, sexy and deadly. That basically sums him up in a nutshell. Also, he makes me laugh, a lot. He’s got a lot of great one liners. Alan Ryves: Oh Alan. *sigh* Alan is Nick’s older brother. He’s is geeky, but extremely caring. He has this endearing characteristic. He also is not all he appears to be. Mae Crawford: HANDS DOWN MY FAVORITE CHARACTER! I am Team MAE! She has pink hair, is spunky and feisty and will do anything to save her brother. Plus she is just awesome. Jamie Crawford: Mae’s little brother. Jamie is also pretty awesome. I should just be on team Crawford, cause I love Jamie too, even though Jamie is gay. Jamie is the most vulnerable character I would say, but he is also pretty funny. Nick and his unlikely friendship is also one of my favorite parts of this book. Sin: You just sort of meet Sin in this book, butt still you learn a bit about her, like she dances at the Goblin Market and is the one who will eventually take it over. And she’s also pretty awesome. So that’s my take on the characters in this book. Bascially they are all awesome. They are each their own person too. The character in this book come alive off the page.
This book series reminds me of a British version of the television show Supernatural.It is just as awesome as well. There is a lot of butt kicking of warlocks and demons and such. And there are two brothers who fight these bad things. Its amazing.
So I want to talk about how this book’s twist completely left me blindsided. I have to say, this was probably one of the first books I had ever read where I was completely AWESTRUCK by the twist at the end. I had no idea it was coming. First time I read the book I remember sitting there thinking “No, no, no. That cannot be true. That cannot happen.” But alas, it did. Bravo to Sarah Rees Brennan for an amazing twist that completely took me by surprise. Literally, I had no clue. However, upon going back and reading the book, you see little hints and little clues that are super obvious once you know the twist. And I love that.
Besides being awesome, this book is also really humorous. Sarah Rees Brennan has a great balance of seriousness with humor. Seriously, I giggle a lot when I read this book. But also, there are some really serious parts that are written extremely well. Also, Sarah Rees Brennan is and evil genius. I swear she takes pleasure out of torturing her characters, and this is just the beginning. And I mean that in the nicest way possible. You learn that when things in this series seem good, something bad is gonna happen. And it makes you gasp and kind of freak out and yell with your fist shaking “Curses Sarah Rees Breenan!” Or at least this book does that to me.
Basically, this book is just awesome. It’s a great first book in a series that really gets the ball rolling. I feel like more people need to read this book series, because a lot of people haven’t. I have to say, I love this series so much I have two different editions of it, the UK and US version. People most go out and read it!
Follow Overflowing Shelf on WordPress.com
Join 652 other subscribers